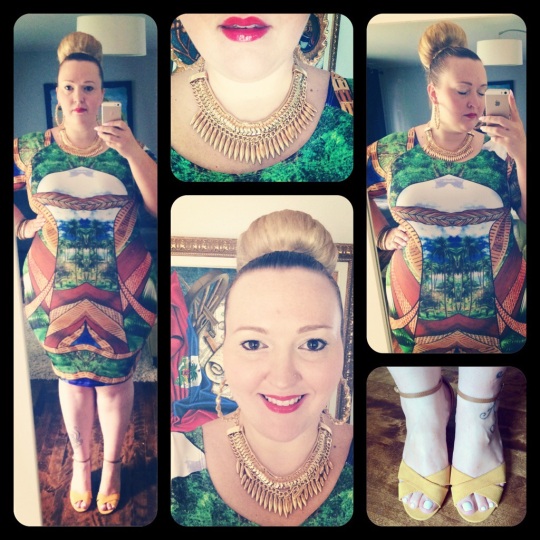 Ok… I’ve been SO excited to wear this dress, and now that I have it on, I can’t stop smiling!!!

From the minute I first laid eyes on it, I just knew… This is the one. The flattering length, bodycon cut, and the print… Ohhh, the PRINT!!! I can’t even!!! When I look at it, it evokes images of coconuts, sand, and ocean waves… A dusty roadside marketplace, colorful linens and mangoes for sale… It is, in a word, perfection.

I’ve paired this fabulous dress from Posh Shoppe with this stunning, regal necklace and twisted hoop earrings from Forever 21, my signature gold bangles, and pretty yellow and cognac colored wedges.

I’ve pulled my hair up in a big, luxurious bun for an elegant, exotic look that definitely lives up to this dress’s fantastic tropical print. 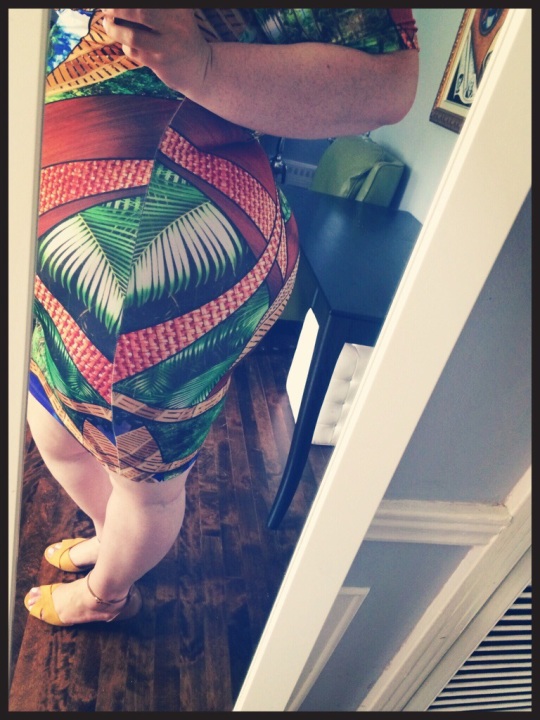 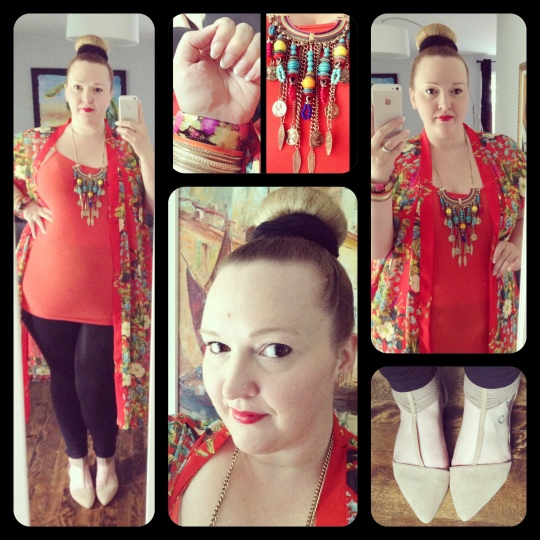 It’s been raining for two days straight here in Montreal, so I figured I would brighten up my day (and hopefully yours, regardless of the weather) with this very colorful post, featuring this stunning, multi-colored floral kimono from Forever 21+ and this amazingly vibrant necklace from ALDO Accessories.

I’ve paired these pieces with my trusty black leggings from Additon Elle, a reddish-orange tank top (Forever 21+) which matches perfectly with the kimono, cute T-strap flats (Forever 21) and some colorful bracelets, to create a bold, lively look that could brighten up just about anyone’s day!

Since the start of this year, I challenged myself, and I went from someone who feared wearing color, to… Well… This girl that you see here! I’ve already received so many compliments on this outfit – it’s crazy! I never could have imagined that I would feel so free and confident wearing such bright, bold hues, but let me tell you, it feels amazing!!!

All can say is this – never be afraid to be seen. Do not feel like you should be invisible. Wear color! There is a joy that comes from wearing beautiful colors that I never new existed until I really gave it a shot; and I would hate for any of you to miss out on this fantastic feeling!!! 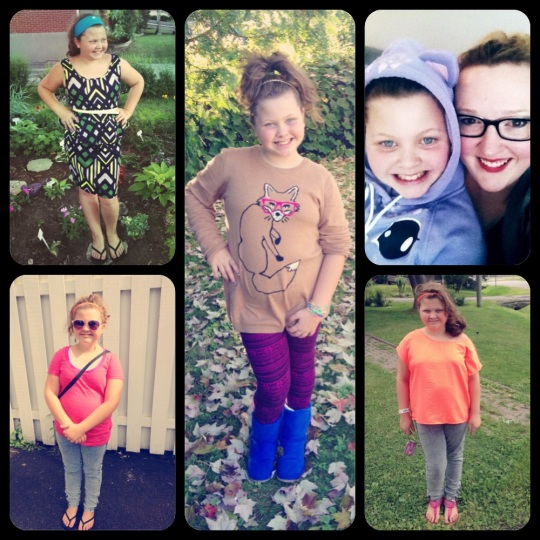 What are we teaching our children when we call ourselves ugly? What are we showing them when we look in the mirror and criticize our imperfections? I had never given it much thought until I started noticing one of my own children putting herself down.

This is my daughter. She is almost 11 years old, gorgeous, a little bit chubby, and is already showing signs of low self esteem. She’s already starting to call herself fat; and not the “I am fat girl, hear me roar” kind of fat… But the “I am worthless because I have a pudgy belly and round hips” fat. I’ve always told her she was beautiful, told her she had value, told her not to listen to those who tried to bring her down; but what had I missed? The answer is, that I had overlooked probably the most important factor of all; myself.

When I finally realized the answer to my question, it was so simple. I felt like such a failure for having exposed my beautiful girl to all of the things I had tried so hard to save her from. I felt guilty. Through all of my efforts to boost her confidence, she had watched me destroying my own. Not only had I taught her the behavior, but I had also ruined any credibility my words of encouragement to her had had; for how could she take me seriously when I was being such a hypocrite?

The day I realized what I had been doing to her was the day I decided that I would stop letting my flaws define how I talked about myself. I would stop obsessing about what I wanted to change and start focusing on what I liked about my body.

I had already learned to love my face (oh, how many headshots my Facebook friends had been exposed to over the years; smiles, intense stares, and yes, even a few duckfaces). But more recently, because of my reality check, I learned to accept my body for what it was. I stopped wishing I had a flat tummy; I stopped saying ‘if only my ______ wasn’t so fat’. I started truly appreciating my curvy hips, my defined waist and my great legs, among other things. And it was funny, because oddly enough, I ended up liking more things about my body, than not. Through it all. my daughter continued to observe me; and she still does.

She now watches me as I look in the mirror admiring my curves instead of trying to cover them up. She sees me taking pictures of myself and she reads my blog (she is super proud of me, by the way). I have explained to her that I will never let the word FAT insult me or use it to insult myself again and that instead, I will use it with pride. Most of all, I have promised her that I will be a positive example from now on.

My hope is that the damage can be undone; that she learns to love her body the way I have. I pray that she realizes that she is beautiful; that she trusts me when I tell her so and that she never has to spend another moment believing that being fat means being worthless.

Baby girl, this one is for you!!! XOXO 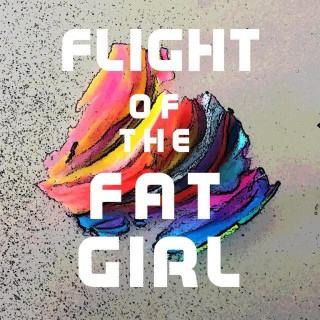